Preprints (earlier versions) of this paper are available at https://preprints.jmir.org/preprint/18664, first published March 11, 2020.

Authors of this article:

Background: Brucella is a gram-negative, nonmotile bacterium without a capsule. The infection scope of Brucella is wide. The major source of infection is mammals such as cattle, sheep, goats, pigs, and dogs. Currently, human beings do not transmit Brucella to each other. When humans eat Brucella-contaminated food or contact animals or animal secretions and excretions infected with Brucella, they may develop brucellosis. Although brucellosis does not originate in humans, its diagnosis and cure are very difficult; thus, it has a huge impact on humans. Even with the rapid development of medical science, brucellosis is still a major problem for Chinese people. Currently, the number of patients with brucellosis in China is 100,000 per year. In addition, due to the ongoing improvement in the living standards of Chinese people, the demand for meat products has gradually increased, and increased meat transactions have greatly promoted the spread of brucellosis. Therefore, many researchers are concerned with investigating the transmission of Brucella as well as the diagnosis and treatment of brucellosis. Mathematical models have become an important tool for the study of infectious diseases. Mathematical models can reflect the spread of infectious diseases and be used to study the effect of different inhibition methods on infectious diseases. The effect of control measures to obtain effective suppression can provide theoretical support for the suppression of infectious diseases. Therefore, it is the objective of this study to build a suitable mathematical model for brucellosis infection.

Objective: We aimed to study the optimized precontrol methods of brucellosis using a dynamic threshold–based microcomputer model and to provide critical theoretical support for the prevention and control of brucellosis.

Conclusions: By demonstrating the optimized precontrol methods for a brucellosis model built on a dynamic threshold–based microcomputer model, this study provides theoretical support for the suppression of Brucella and the improved usage of protective measures by key populations.

Infectious diseases enter the human body through pathogens such as bacteria, fungi, or viruses, causing bodily damage or even death. In serious cases, infectious diseases cause large-scale transmission of diseases among the population [1]. Furthermore, the number of diseases transmitted from animals to humans is increasing at an alarming rate. Viruses mutate over time, and some mutations make them more suited to living in the current environment and the physiological states of various hosts [2]. More than 60% of the infectious diseases in humans are caused by animals and more than half of animal diseases can be transmitted to humans, which underscores the need for researchers to study such diseases [3]. The infectious disease investigated in this study is brucellosis, which is a zoonotic disease caused by Brucella [4].

Brucella is a gram-negative, nonmotile bacterium without a capsule. It is an aerobic intracellular parasite that can reduce nitrates. Brucella has a strong ability to adapt to the environment, which makes it able to tolerate dryness and cold temperatures and survive in meat or dairy products for up to 2 months. However, Brucella is not heat-resistant and is killed by boiling water. Common disinfectants need several hours to destroy Brucella.

By understanding the effect that control measures have on transmission suppression, we can create theoretical support for the suppression of infectious diseases [9]. The objective of this study was to construct a mathematical model of brucellosis infection. By studying the transmission characteristics of Brucella and building a Brucella transmission model, the precontrol methods for key populations (Brucella-susceptible populations) were designed. We then determined the utilization rate of protective tools by key groups before and after a presentation on precontrol methods. This study provides theoretical support for the suppression of Brucella and protective measures for key populations.

Based on the characteristics of Brucella transmission from goat flock to humans, we built a model of Brucella transmission that divides the flock into two groups: ordinary ewes and other goats. In addition, we divided the ordinary female flock further into susceptible goats, infected goats, and vaccinated goats. The human population was divided into two groups: susceptible and infected people. Additionally, infected people were divided into acute and chronic infections. Models were built based on the characteristics of Brucella transmission. The following hypotheses were made: (1) There is no route of infection among humans. Brucella infections in humans come from direct or indirect contact with goats. (2) Goats and humans have natural deaths. (3) The number of human births and the number of goat flocks are considered, as are the natural death of bacteria and bacterial death caused by disinfection. The transmission of brucellosis is shown in Figure 1. The diamonds represent the ordinary ewes, the rounded rectangles represent other goats, and the rectangles represent the human population.

In these equations, A is the input constant value, b is the probability of each infection, m is the conversion rate of the young to mature goats, d is the production rate, t is the ratio of the adult and young infection rates in the flock, which should be between 0 and 1 combining with the actual situation, a is the mortality rate of infected sheep due to brucellosis, k is the release rate of infected bacteria per unit time, and d is the Brucella mortality rate in the entire goat flock.

Since the last 3 equations are independent of the previous 9, only the first 9 equations are included when considering model dynamics. Within equations 1-9, an equilibrium point free of brucellosis can be found, represented by the equation below:

The resulting positive invariant set of the research system is as follows: 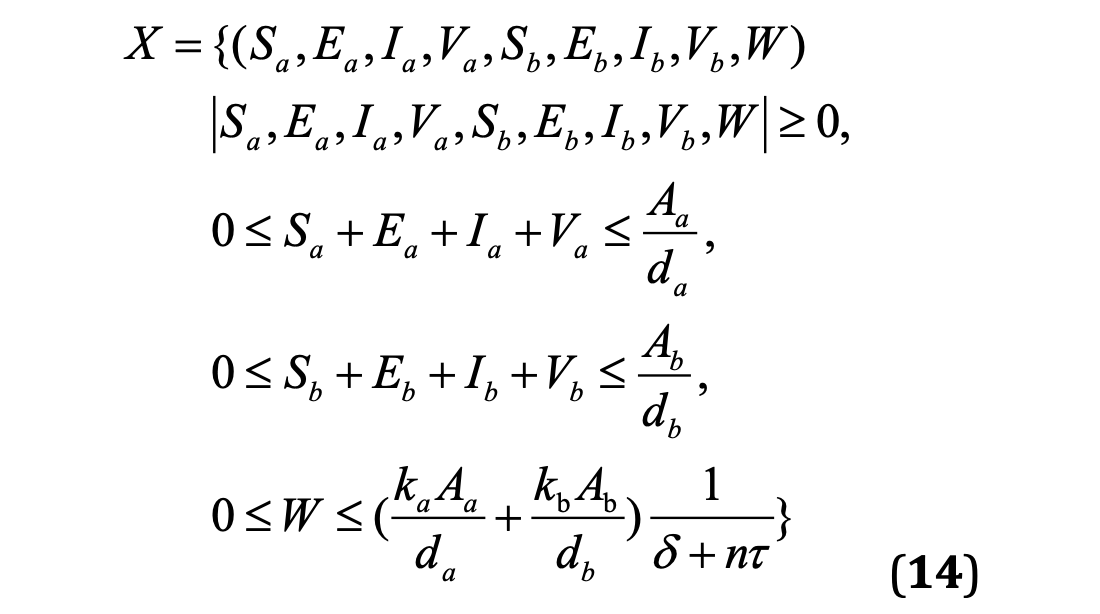 Based on the number of brucellosis cases reported on the internet, a hypothetical estimation and numerical simulation process were performed. The values used in the numerical simulation are described here. First, 2-3 years is the inventory time of ordinary ewes, and the number of ewes is about 4.2 million; therefore, the average removal rate of ordinary ewes db is 0.4, and the supplement amount of ordinary ewes Ab is 1.68 million. According to the actual data, the production rate of the flock is about 60%. Therefore, the removal rate of other goats is 0.6, and the supplement amount is 1.976 million. Second, according to population data, the natural death rate in the human population is 5.68%; thus, the supplement rate of the human population is estimated, and the supplement amount is about 9,150. Third, according to the existing data, the culling rate of infected goats can reach 0.15; therefore, the positive detection rate of ordinary ewes and other goats was set to 0.15 for this model. Additionally, according to the average 1-month survival time of affected goats, the culling rate of infected ewes and other goats is set to 12.

Studies have shown that the daily behavior of susceptible populations (that is, those with high frequency of contact with animals) is the key to whether brucellosis can be effectively transmitted, and that the irregular daily behaviors of susceptible populations greatly increase the rate of Brucella infection; thus, it is important for them to protect themselves during daily exposure [10]. Due to the generally low level of education of the key populations in this study, they lack self-protection awareness and knowledge of protective measures to varying degrees. In their daily contact with animals or related products, they cannot achieve comprehensive and universal protection from Brucella infections.

The precontrol methods in this study included giving lectures on prevention, control, and health education to the experimental population, so that they would have a comprehensive understanding of Brucella. This laid the foundation for additional precontrol works. Subsequently, Brucella bacterial preventive tools (such as gloves, masks, and disinfectants) were distributed to the key populations and the relevant preventive training was delivered, followed by a question and answer session that answered the key populations’ questions about Brucella protection. This strengthened their protection awareness and led them to change their daily habits and use of protective tools. The experimental population involved in this study was the staff on a farm. All personnel were included in the experiment and signed informed consent forms.

Follow-up visits or phone calls were made to infected patients to understand whether they are used to the corresponding prevention and control behaviors, and whether their prevention and control behaviors are correct. Additionally, any questions that susceptible populations and infected patients have about brucellosis should be answered promptly to reduce panic and strengthen the effect of precontrol methods.

SPSS 22.0 software (IBM) was used to statistically analyze the data obtained in this study and make corresponding statistical descriptions. The Chi-square test was used to statistically analyze the clinical characteristics of the diseased populations with different disease forms and different Brucella contact history. P<.05 indicates that the difference is statistically significant. For comparison between multiple groups, the Chi-square test was used, and the check level was a=2a/k(k-1), where k is the number of grouping groups, and P<a represents that the differences are statistically significant.

Results of the Numerical Simulation

The mathematical model of this study suggests that humans are infected with Brucella through direct or indirect contact with animals. Therefore, to avoid Brucella infection, it is necessary to first isolate humans from Brucella, a process in which utilizing many protective tools is the most critical step.

Brucella has a strong ability to adapt to the environment. It can tolerate dryness and cold temperatures, and can survive in meat and dairy products for up to 2 months. Presently, it is not possible to completely remove the infection sources of brucellosis. Additionally, it is not currently possible to develop a practical and effective vaccine for brucellosis. Studies have shown that the daily behavior of susceptible populations (that is, those with a high frequency of contact with animals) is the key to whether brucellosis is transmitted further. Indeed, the irregular daily behaviors of susceptible populations could greatly increase the rate of Brucella infection; thus, it is important that they protect themselves when in contact with animals, consistent with previously published research [11] on the suppression of brucellosis transmission.

In this study, we first designed a transmission model of Brucella in animals and humans. It found that human infection by Brucella is through direct or indirect contact with animals. Therefore, to avoid Brucella infection, it is necessary to be isolated from animals infected with Brucella. The utilization of various protective equipment and tools is critical. Prior to the precontrol methods and information dissemination, due to the generally low level of education in the key populations studied, people lacked knowledge about protective measures to varying degrees. When in daily contact with animals or related products, people in these key populations could not achieve comprehensive and universal protection from Brucella infections.

END for: Endnote
BibTeX for: BibDesk, LaTeX
RIS for: RefMan, Procite, Endnote, RefWorks
Add this article to your Mendeley library